One of the perks of having a pro cyclist as a partner is access to unlimited opportunities and invitations (usually from him) to the events and races that he is traveling to and competing in. Most of the time this is awesome and completely amazing, but the other 10% of the time it’s pretty rough. Supporting Gordon in his riding and racing is one of my top 10 goals in our relationship and when my schedule allows, this usually takes the form of discussing race schedules and events, listening to him monolog about SS gearing, assessing and internet stalking his competition (only the fastest ones, so if you’re slow, don’t worry, I haven’t stalked you), bottle hand-offs, wardrobe consultations, nutrition support (i.e. shoving food in his mouth), and anything else that I am capable of helping him with as long as it doesn’t involve actual bike maintenance (with the exception of being able to change a tire and lube a chain). However, in the last 6-8 months I’ve started “magically” getting signed up for more and more events to not just support Gordon in, but actually race myself. Not only have I gotten signed up for things, I’ve also (thanks to the Valentine Fairy) received a fabulous new hand built bike that was specially made for all of my racing needs.  And what’s a girl to do with a gorgeous new blacked out 650b Hometown? Well, race it of course.

As we all know, this winter has been rough. I have done more inside workouts than I would care to count and I have certainly ridden more trainer miles than I would care to recall. In fact, I have had less than a handful of rides off the trainer since before Christmas! Embarrassing really. Despite all this, I have somehow been able to maintain some semblance of fitness (even if it is only in my head), and complete a couple cool events at the start of this new season. Monster Cross was the first event of the year for me and I had a great ride there and met all of my goals while still feeling pretty darn good for 50 miles of hard/constant pedaling. So with the first official day of spring landing sometime last week and the  Cohutta 100 coming up within the next month, it was time for another big ride and a chance to test out my new racing wheels and my trainer conditioned legs.

The HARDford 50 Gravel Road Race was just that- hard. It would’ve been a beefy race without the freezing temps and constant rain, but the conditions made it, by far, one of the toughest days on the bike that I’ve ever had…and that saying a lot considering I’ve ridden the Shenandoah Mountain 100 in the rain, not once, but twice! We left my house early and somewhere along the drive it started raining. Hard. I was nervous. Not only was I nervous about the weather, I was nervous about taking my new bike out in the terrible conditions for a long and certainly muddy ride. I was also nervous about being cold and being able to finish because of the rain. I am one of those people that when I get cold on the bike I generally stay cold and the fact that I knew I would be wet on top of being cold worried me. Despite my fears, and in an effort to “support” my man (or at least that’s what I told myself I was doing), I put on everything that I packed and reluctantly shivered my way to the start. The roll-out was easy and a good pace for me. I’m slow to warm up and don’t usually get out of the gate fast so I was happy with the easy pace and a chance to benefit from the protection of the group. We hit the first climb very soon after the start though and I immediately found myself alone, in between the front and back group, and soaked through from the rain already. Great. This was going to be a long ride. 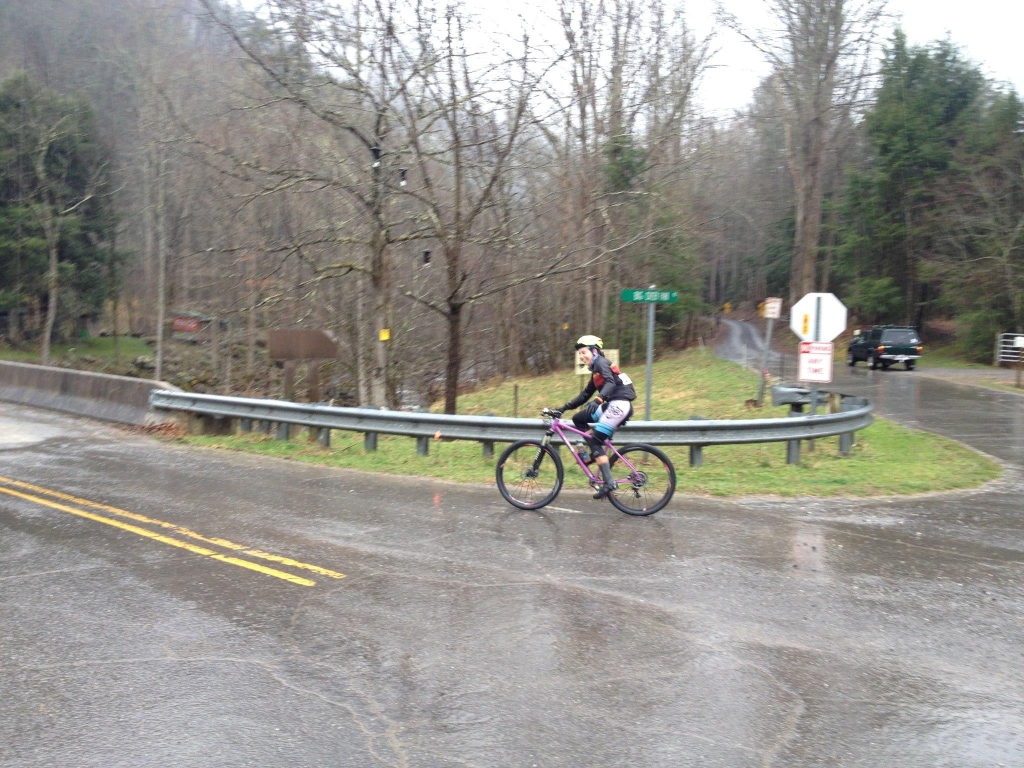 About halfway to the first aid station I caught up to a couple who were riding at a steady pace and latched onto them for a while until they stopped to wring out there socks. Not a good sign for them. Another girl caught me shortly after that and we had a great time conversing and attempting to distract one another from the miserable conditions and the gnawing concern that we might actually lose digits from the absurdness of the weather. We finally reached aid #1 and while my companion stopped, I kept rolling for fear of getting too cold while not moving. I don’t remember much of the climb to aid #2. I know I passed a handful of people, heard some talk of DNF-ing, lost feeling in my other foot as well as my hands, and had the thought that if I did in fact make it back alive that I should see if my insurance paid for psychological evaluations. Aid #2 came none too early and I promptly grabbed a piece of French toast (AMAZING!), asked how long ago Gordon had come through/was he in the front group, and started the long 8 mile grind to aid #3 on the top of Max Patch.

The climb to Max Patch was a dark place. It wasn’t a hard climb, it was just long and I was cold. Very cold. I caught a group of 3 guys, rode with them for 2-3 miles and then dropped 2 of them on one of the pitchier sections. I tell you what, that 1/11 granny gear is the bomb. I had several men lusting after that pie plate gear through the fog and deep gravel. Aid #3 provided a handful of peanut butter m&m’s, half a coke and some beta on the long descent off the mountain. I knew it was going to be a cold ride down so I just tried to get it over with. The fog was so thick that you could not have enjoyed the scenery if you’d tried, so my goal was to get home and get home fast. Suspension was nice and I was thankful that I was not on a cross bike as I was never entirely sure if my fingers were actually on the brakes since I could not in fact feel them. My bike handled like a gem though despite my impaired skills and I caught the 2nd place girl (on a cross bike) about 10 miles from the finish on the technical portion of the descent. The last 8 miles of the course were all paved, downhill rollers with one or two pitches where eager dogs were waiting at the top. At this point though I didn’t care. They couldn’t hurt me anymore then what I had already gone through and even if they did, I wouldn’t have felt it due to the cold.

Seeing Gordon and Pippa (her first race, by the way) at the finish was the best feeling in the world. I could not have been more pleased to be back, safe, alive, with the chance to get dry, warm and fed. The bike was a star, the course was amazing (I will go back when it’s dry), entry fees went to a great cause and the food was fantastic. While many of the starters did not finish and while Carey Lowery finished a good distance in front of me, I am so proud that I finished, so thankful I still had all my fingers and toes, grateful for an opportunity to race and support Gordon (who won overall!!!), excited to ride a kicking bike that was absolutely flawless, and finishing 2nd was an added bonus! The HARDford 50 was hard and the weather made it harder, but something about those mountains and amazing climbs make you want to go back for more. Certainly a race worth putting on your calendar for next year.